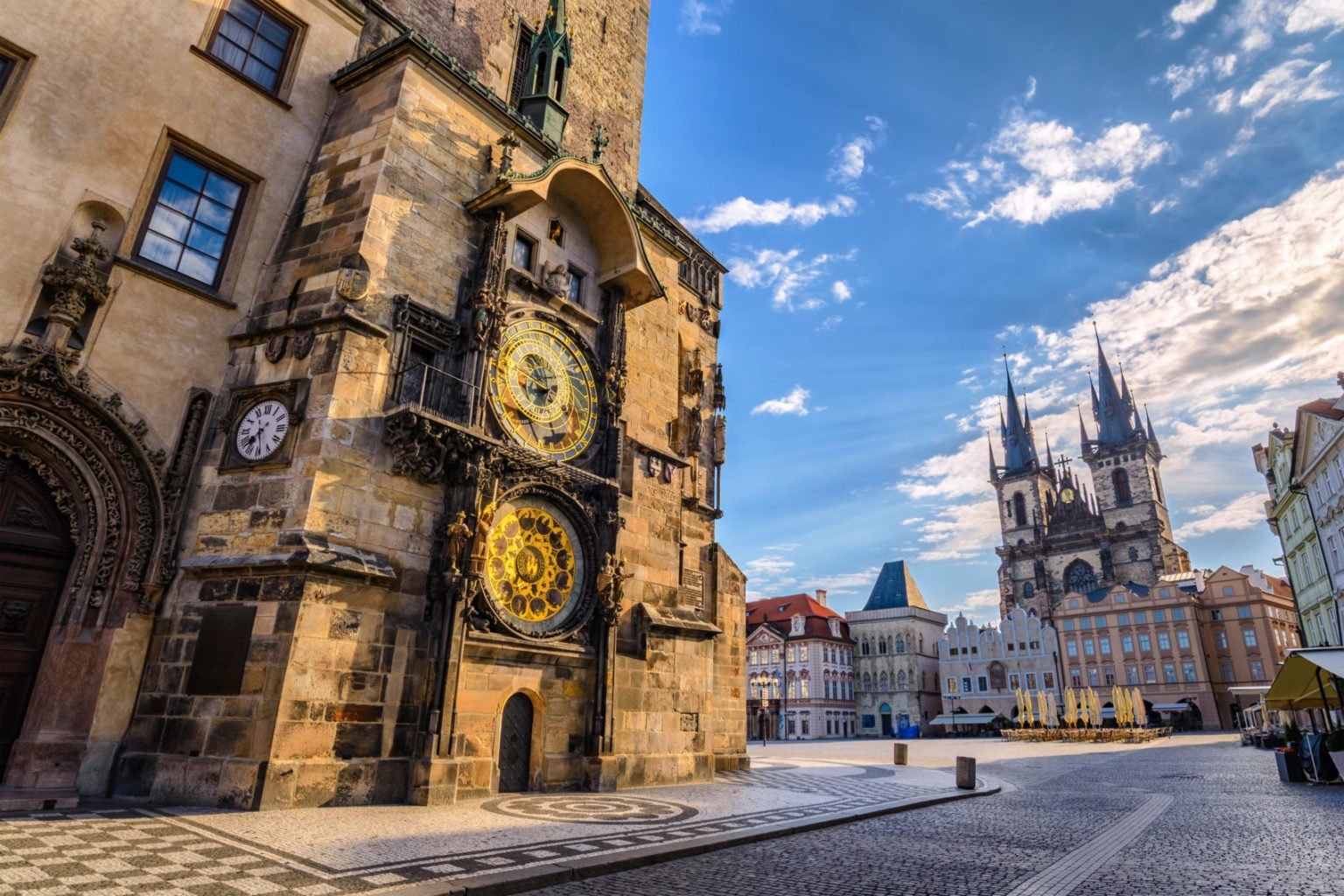 Everybody who has ever visited Prague will tell you that it is one of the most beautiful cities in the world. The architecture, the culture, the Czech food and beer. It would be a shame not to do some sightseeing while you are enjoying your Prague stag party or hen party. The best and most efficient way to discover the city is to take a private tour. We offer a variety of tours in Prague and to the Czech countryside. Below is a list of Prague’s landmarks that you should definitely see during your stag party or hen party stay.

The Old Town Square is the very heart of Prague. Since its conception in the 11th century it was regarded as the main square in Prague where regular markets were held in the middle ages. On the square you can admire the famous Prague’s Astronomical clock from 1410. It is located on the side of the Old Town Town Hall. The clock shows 4 different times, the location of the Sun and the Moon on the sky, phases of the Moon, the Zodiac and a calendar. Every hour on the full hour there is a little show which lasts approximately 1 minute. During the show, the statues on the clock move and tell an ancient story.

In the middle of the Old Town Square are two christian monuments. The monument of Jan Hus surrounded by his followers is commemorating the Czech reformer of church. Facing him on the opposite side of the square is Virgin Mary on top of a collumn. These two monuments symbolise peace between the protestants and catholics in our country. The Tyn Church which is hovering over the square became a symbol of Prague. The 14th century church is dedicated to Our Lady. Another church, built in 1737 in baroque style, is located on the intersection of the Old Town Square and the Parizska street. The Parizska street has many luxurious stores such as Louis Vuitton, certainly not something you want to spend money on while you are enjoying your Prague stag party or hen party.

People say you have not really been to Prague if you have not crossed the Charles Bridge. This famous bridge was founded in the 14th century by the emperor Charles IV and for almost 5 centuries in was the only bridge in the Czech Capital. Charles IV was a very religious man who was into symbolism, therefore he decided to found the bridge on a very special date – the 9th of July, 1357, at 5:31. Think about the date again – 1357/9/7/531. It’s a palindrome and only odd numbers. The bridge took 49 years to build and Charles IV had never seen it finished. It would sure be a pity not to cross this bridge during your Prague stag party or hen party stay as it offers magnificent views on the city center.

Prague Castle is the most visited landmark in the Czech Republic. It is the largest castle complex in the world and it was the seat of the Czech kings since the conception of the Czech state in the 9th century. The castle consists of palaces, monasteries, churches and other buildings, surrounded by walls. The whole complex sits on a hill which is easily accessible only from the Western side. In the middle of the castle lies the ancient St. Vitus Cathedral. The Cathedral serves as the most important church in the Czech history. Inside of it were held corronations, royal weddings and most of the Czech kings are burried there. It is still an active catholic church and every Sunday there is a mass. Althought the church was founded by Charles IV in 1344, it was finished in 1929. The construction was held off by the hussite wars at the beginning of the 15th century and for a long time only a few modifications were made. In 1870 the project was taken over by Josef Mocker who decided to make the cathedral twice as big, with two massive frontal towers. The project was symbolically finished in 1929, the 1000th year anniversary of St. Wenceslas’s murder. Whether you came to Prague for a stag party or a hen party, the Prague Castle definitely shouldn’t be missed out.

The longest square in the Czech Republic is named after the patron saint of our country. St. Wenceslas was a ruler of Bohemia in the 10th century and was regarded as a good ruler. Out of greed for power, his brother Boleslav ran a sword through his back while they were entering a church together. Today there is a large statue of St. Wenceslas sitting on a horse on top of the square. Behind the statue is a beautiful building of the National Museum. The square is well known among the stag parties and hen parties which come to Prague because it has plenty of night clubs and gentlemen’s clubs in its proximity.

We understand that you came to Prague to party and to do other fun activities. However you shouldn’t miss out on sightseeing. Prague is one of the best cities in the world to do so. You can always combine sightseeing and partying by trying out our beer bike activity or any of our boat activities.

Send us an enquiry